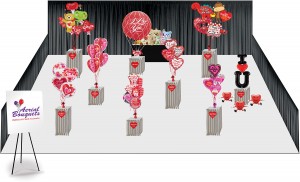 It’s it Valentine’s day already? It sure feels like it after doing this booth for Aerial Bouquet.

The HEB grocery store chains were having their annual trade show the George Brown convention center in Houston.
After many weeks of phones calls and planning, I designed a booth shapes that was 30 x30. That was supposed to look like this.

Well I had my suspicion about a trade show booth that was 30 x 30. I asked over and over to everyone that was in change “are you sure this is not an island booth?”

Well, surprise, surprise, surprise!!! When we got there guess what we found? That’s right a 30 x 30 Island not only was it an island it was first booth you saw when you entered! It was a great location and everyone would see it first think when they entered the show, BUT….. hello….. There was no way I could put a 30 x 10 solid balloon wall up. It would totally block the sight-line of all the other booths.

So after weeks of planning and 2 day of prepping we were back at square one!

I had spent 2 days assembling all the balloons. Taping balloon panels together to make the wall and cable tying and the curve balloons for the overlay. So now I had to think fast and make it work with the products we had.

After a few conversions with the show manager on what I could and could not do, I had Plan B. That idea soon morphed into plan C. We decided on making giant 3d columns to put in the back of each corner. This would give us the visual impact we were looking for without blocking all the other venders. We could also new use the new I “heart” U foil balloon on the top. 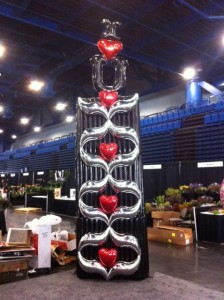 We also made short and tall pedestals out of silver panels. 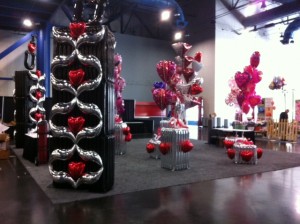 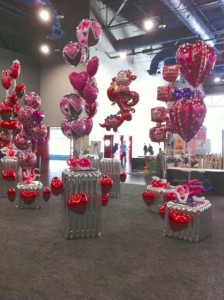